COSP Side Event – EDF: More than Four Months in War: Latest Update on Ukrainians with Disabilities

This event aimed to provide the opportunity to organisations of persons with disabilities (DPOs), disability rights experts, and States engaged in the emergency response in Ukraine to provide the most recent update on situation of persons with disabilities affected by the armed conflict and share their recommendations and requests with other UN Member States, donors, humanitarian actors and other stakeholders. The Permanent Missions to the UN of: the European Union, Lithuania, Poland, and the United States, the International Disability Alliance, and the European Disability Forum (EDF) were present for the event. The event was moderated by Ms Catherine Naughton, Director of the European Disability Forum (EDF).

Three representatives gave opening remarks, beginning with the Permanent Representative of Ukraine to the United Nations Ambassador, Sergiy Kyslytsya, stating that 2.7 million Ukrainian with disabilities are at high risk in Ukraine due to the war. 143.600 persons with disabilities have been registered by the Ukrainian government authorities as internally displaced persons. Persons with disabilities are at a higher risk than others so, Mr Kyslytsya exclaimed, we must protect them during the war and provide them with a new quality of life after the victory.

Mr Yannis Vardakastanis, the Chair of the International Disability Alliance, explained that there will be a new disability inclusive emergency response mechanism to enhance disability inclusion in emergency response and coordination. All DPOs, governments, donors, academics etc. will be invited to participated in consultation for this mechanism. It will bring together different stakeholders to facilitate connections and information sharing. Mr Vardakastanis mentioned that EDF has been very active from the beginning, supporting both members of EDF from Ukraine and engaging intensively with DPOs in Ukraine.

The final opening remark was made by the Special Rapporteur on Rights of Persons with Disabilities, Professor Gerard Quinn, underlining that there are two treaty regimes at play – UNCRPD, Article 11 on conflicts and disasters as well as the 4th Geneva Convention of 1949 on the protection of civilians during armed hostilities. Prof. Quinn explained that we must align these two regimes. Three reports on armed conflict and disability are being prepared, the first, completed last year, which assessed the visibility of persons with disabilities along the peace and conflict continuum. It concluded that persons with disabilities are relatively invisible along that continuum. The second report is now with the International Red Cross. The third report, underway in Ireland, will focus on peacebuilding processes. An important workshop was held in Berlin at the beginning of May, looking how older people, children and persons with disabilities are affected by the conflict.

The first panellist of the discussion was Larysa Bayda, Director of Department, National Assembly of Persons with Disabilities of Ukraine (NAPD), who explained that there are specific supports for persons with disabilities in Ukraine. DPOs in Ukraine have highlighted important changes required – such as providing information alerts to people in accessible format, and the need for safe evacuations for persons with reduced mobility.

Member of the European Parliament, Dragos Pislaru, the Chairman of the Committee on Employment and Social Affairs of the European Parliament, provided an update on how the EU Parliament is taking action. Mr Pislaru outlined that, in the European Parliament, they have identified two important layers – one is Russia’s aggression and the violation of international law for which they condemn this action. The second layer is the EU’s involvement in responding to that and their concrete actions. The EU Parliament has been active, having adopted two resolutions earlier this year – one was the Parliamentary resolution to protect children and young people fleeing war, where it was reiterated to place a special focus on children with disabilities. The other resolution adopted was on the broader social and economic consequences on the Russian war in Ukraine, where the rights of persons with disabilities were highlighted.

An update from Poland was given by Mr Pawel Wdowik, State Secretary and Plenipotentiary for the rights of persons with disabilities of Poland. Mr Wdowik mentioned that the Act of March 12th, adopted by the Polish Parliament, on assisting Ukrainians in armed conflict, legalised the stay of those who fled to Poland from Ukraine. This Act also defined their rights, and as a result, specific assistance to persons with disabilities has been provided as of the first day of the war. The support system combines actions of the government, local authorities and NGOs. These activities are financed by the state fund for rehabilitations for persons with disabilities.

Mr Wdowik said that 29 million dollars will be spent in 2022 on the implementation of the programme assistance to Ukrainian citizens with disabilities. Refugees with disabilities are provided with assistance from the moment they cross the border via the special assistance hubs in the provinces bordering Ukraine. A hotline has been launched for border staff to provide information on institutions and forms of support. Further, Ukrainian citizens have free access to care including rehab and hospice care, as well as to the labour market.

Ambassador Rytis Paulauskas, Permanent Representative of Lithuania to the UN, gave an update from Lithuania, opening by stating that they condemn the unprovoked war. Ambassador Paulauskas said that the rights of persons with disabilities in conflict areas is one of the main priorities for Lithuania, and they urge all states to uphold their commitments on international law, in line with the UNCRPD. Regarding their concrete actions – all Ukrainian refugees, once registered, acquire full access to social services. They will also receive care costs. The government has recently adopted the legislative amendments to enable Ukrainian citizens to be assessed for disabilities. Ukrainian person with disabilities have access to all their medical needs, and disability benefits. Families of persons with disabilities from Ukraine, receive assistance, including financial. Sign language interpreters are also provided.

Ms Sara Minkara, U.S. Special Advisor on International Disability Rights, US Department of State, gave an impassioned statement, insisting on the need for the disability narrative, which is still one of pity and charity, to be viewed through a value-based lens. In terms of concrete actions, the Inter-agency Working Group communicate the challenges to different channels of the government to ensure information on persons with disabilities in Ukraine is passed on. Ms Minkara believes this is an opportunity to rebuild a society that’s accessible to and inclusive of all persons.

Mr Dariya Herasymchuk, Adviser – President’s Commissioner for Children’s Rights and Children’s Rehabilitation, Deputy Head of Ukraine delegation, highlighted the issue of the evacuation of children with disabilities, there are problems with the waiting centres for this, special transportation as well as social support. Unfortunately, today the pace of the evacuation of children with disabilities is slowing down as we receive less invitations from institutions and shelters for children with disabilities abroad. However, support from the EU has enabled them to develop a database of a portal of information of Ukrainians who were forced to seek shelter at the beginning of the war. Mr Herasymchuk finished by asking, as a representative of President Zelensky, the international community to support Ukraine.

Ms Mariia Karchevych, Deputy Minister of Health for Digital Development, Digital Transformation and Digitization, Deputy Head of Ukraine delegation, made the final statement. Ms Karchevych said that it is impossible to assess how many persons with disabilities remain in the destroyed occupied towns and villages. However, the most acute issue now is to provide food, water, and medicine to the people trapped under occupation, as well as to provide financial support for the internally displaced persons with disabilities. Ms Karchevych mentioned that importance of launching active programmes to support employment with subsidised jobs for persons with disabilities, as well as psychological assistance programmes. 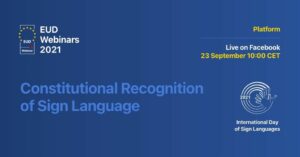 The European Platform of Deafness, Hard of Hearing and Deafblindness has the pleasure of inviting