The European Union of the Deaf (EUD) hosted the European co-operation meeting between different deaf-related organisation at European level. The meeting was held at the EUD office in Brussels on 22 November 2011. After the meeting, the delegates visited MEP Ádám Kósa at the European Parliament.

The European co-operation meeting was attended by the representatives from:

On 9th December 2021, the EUD participated in a webinar hosted by Equinet, entitled ‘Tackling

European Standard on Accessibility of the Built Environment 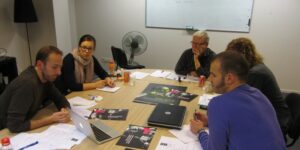