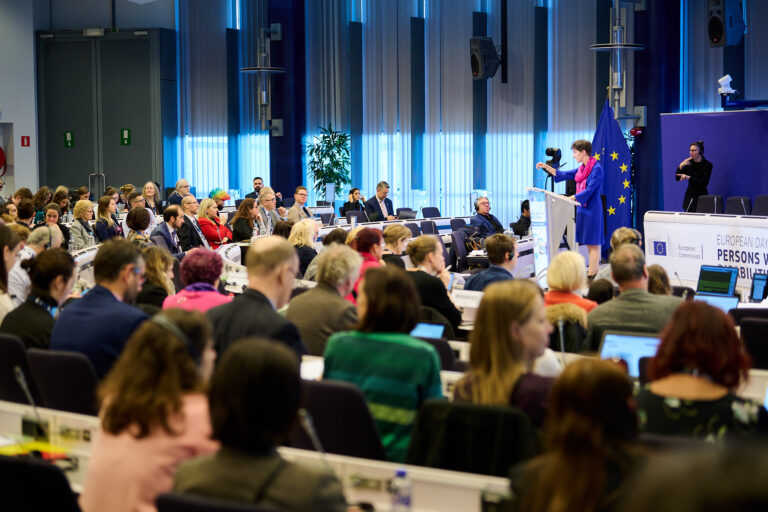 The European Commission organises this annual conference, in partnership with the European Disability Forum (EDF), to mark the International Day of Persons with Disabilities (EDPD). This 2-day event brings together more than 400 policy-makers, high-level experts and disability advocates. EDPD 2022 took place from 24-25th November in Brussels.

It was an action packed two days of discussions and Q&A sessions.  The EU disability community met in person, for the first time in 3 years! The EUD Board represented the deaf community of the EU by actively participating during the EDPD and highlighting the key issues faced by deaf persons in terms of access to employment, education, and protection from violence and discrimination. A highlight was the meeting with the EU Commissioner for Equality, Ms Helena Dalli, where the EUD Board had the opportunity for direct advocacy in terms of the EU recognising all its national sign languages at EU level.

The new Head of Unit for Disability and Inclusion, DG EMPL, European Commission, Ms Alison Crabb, opened the conference. Following this, EU Commissioner for Equality, Ms Helena Dalli, made some opening remarks where she emphasised the point that we are all driven by the same principle that “everyone has the right to life without barriers, to enjoy equal opportunities and to live independently.” Ms Dalli also highlighted the importance of the EU Disability Rights Strategy in terms of the recent achievements which among others, include the establishment of EU Disability Platform, the AccessibleEU Centre, and the Employment Package for Persons with Disabilities.

Adding to Ms Dalli’s words, Mr Yannis Vardakastanis, President of EDF, mentioned the context in which the meeting took place – the Russian war of aggression in Ukraine, and how Ukrainians with disabilities have been greatly affected, saying, “In this time of war, persons with disabilities are the first to be left behind and always have their basic rights neglected.”

Following Mr Chatzimichail’s intervention, Ms Sarah Talbi, Belgian national champion of the European Commission’s ‘Together for Rights’ campaign on the EU Disability Rights Strategy, conveyed the fact that it is often the case that persons with disabilities consider any sort of opportunity ‘lucky’ when they should view these as their rights, just as people without disabilities do. Finally, Ms Lucia Alonso, previous Erasmus + beneficiary, and part of the deaf community, discussed her participation in the Erasmus+ programme.

As the EU’s overall goal is a Union of equality where everyone can fully enjoy their rights, the second session looked at international instruments to protect the rights of persons with disabilities, to make this ambition a reality. Ms Katarina Ivankovic- Knezevic, Social Rights and Inclusion Director, DG EMPL, European Commission, began the panel discussion by first mentioning what is regarded as the guiding instrument for disability policymaking – the UN CRPD. Ms Ivankovic-Knezevic said that the UN Committee on the Rights of Persons with Disabilities is expecting the report from the EU by 10th of April, and the EU is in preparations for this now. Ms Ivankovic-Knezevic continued that DG EMPL is taking disability mainstreaming as a key principle, across the Commission and other EU institutions. Moreover, each EU institution has appointed ‘disability coordinators’ whose role is to promote disability mainstreaming in everyday work. Finally mentioned by Ms Ivankovic-Knexevic was the service group on disability which has been established to discuss relevant upcoming initiatives.

The second panellist, Mr Gerard Quinn, UN Special Rapporteur on Disability, mentioned that the next thematic report on the EU will focus on transformation of services required to make community living a reality. The report comes after his two weeks stay in the EU where he was able to observe the EU. Mr Quinn said that although the EU has an important global presence, it could take more of a leadership role in the relevant global and regional debates and stressed the importance of continued EU support on disability matters.

Following this, Ms Patricia Ötvös, Adviser at the Office of the Commissioner for Human Rights, Council of Europe, discussed the UN CRPD’s optional protocol – a side agreement to the Convention which establishes an individual complaints mechanism for the Convention. Ms Ötvös advised that it is important that those countries that have ratified the optional protocol make their reports of violations known to the EU. Ms Ötvös finished by highlighting the Committee’s new General Comment no.8 on Article 27 UN CRPD which focuses on work and employment.

Finally, Ms Marine Uldry, Human Rights Policy Coordinator at EDF affirmed that the UN CRPD is the basis of EDF’s work. Ms Uldry also mentioned the General Comments of the Committee serve as international instruments to protect the rights of persons with disabilities as they provide clarification on implementation on certain articles under the Convention. Further, before the EU’s review by the UN CRPD Committee, EDF submitted an alternative report to the Committee on the EU’s implementation of the Convention which included 17 recommendations for the EU. For instance, the EU has not checked whether all its laws and policies respect the Convention. Encouragingly, many of their recommendations were included in the list of issues issued by the Committee to the EU.

During the Q&A session which followed, Ms Ronit Laquerrière-Leven, EUD Vice-President, took the opportunity for advocacy on sign language recognition at EU level, by asking the following question – “what can we do to help the EU recognise national sign languages?” – to which Mr Quinn provided an encouraging response that he had made a particular recommendation to the EU in his recent report, that the EU must match its Member States and officially recognise EU sign languages at EU level. Ms Ivankovic-Knezevic, highlighted that the EU faces many obstacles to ensure full accessibility to deaf persons as they do not have the specific knowledge e.g. which sign language to use or when to use International Sign or a national sign language – and they struggle with which approach to take. EUD highlights that it recently published a position paper on this topic and will encourage the EU Commission to use it when ensuring accessibility of information and communication at EU level for deaf persons.

Ms Faragau outlined the key EU actions on this topic – the proposal for the EU Directive on combating violence against women and domestic violence. This proposed directive recognises that women and girls with disabilities have a higher risk of violence. This proposal is currently being discussed in the EU Parliament and the EU Council and should be adopted in years to come.

During discussions it was also mentioned that there is the EU common number for helplines for victims of violence against women (VAW) 116 016. It will be operational in the second half of next year. Finally, next year the EU will also set up a network for prevention of gender-based violence – there will be a call for stakeholders to join this network.

During the final Q&A session, EUD President, Sofia Isari, asked the following question – “As the EU just launched a new common number for the victims – will it be accessible to the European deaf communities who need support or help?” To which Ms Faragau answered – behind the common number, is the national helpline that existed before but these national helplines will be accessible through this EU number (116016) not the national number, so the accessibility of the helpline will rely on the accessibility of the national context.

Closing remarks were made by Ms Crabb as well as Mr John Patrick Clarke, EDF Vice-President, in terms of increasing the focus on how our world can be made more accessible and how to advance the rights of persons with disabilities. Finally, the incoming Swedish Presidency of the Council of the European Union made some remarks as to their ambition to integrate the disability rights perspective during their presidency.

EU action towards achieving the 2030 Agenda for SDGs

On the 7th of February, the Committees of the European Parliament on Development and on

Board Meeting in Brussels/Ghent, Belgium

On the 7th June 2017, the EUD attended a public hearing organized by the Study