On Thursday 14th of October 2021, the International Disability Alliance (IDA) and the World Federation of the Deaf (WFD) co-hosted the webinar. The event aimed to present the results of the first Global Survey on Organisations of Persons with Disabilities (OPD) participation and promote the upcoming Global Disability Summit (GDS) in February 2022. Mr Francesco Faulino, a board member of the WFD served as moderator.

The opening address was given by Mr Juan Angel De Gouveia, who currently serves on both the IDA and WFD board,  explained that the survey is a great way to capture the deaf organisations’ perception of their participation with the national governments, the United Nations, and the various funding agencies. The oration also highlighted the vital importance of the perspectives of  deaf organisations under Article 4.3 of the United Nations Convention of the Rights of Persons with Disabilities (UNCRPD), which advocates for collaboration between policymakers and OPDs. Mr De Gouveia’s address provided greater understanding of the DPO’s perspectives and how national governments can provide better and more relevant policy recommendations for the deaf community.

The second speaker at the event was Alexander Bloxs, a Human Rights Officer at the WFD who  serves as the President of the French Belgian Association of the Deaf. Mr Bloxs presented the findings of the first Global Survey Report on Participation of Organisations of Persons with Disabilities conducted in 2018. The survey was circulated  in 7 languages with 573 OPDs respondents originating from 165 countries across all regions with 54% of the OPDs working at the national level. Only 53 of the 573 OPDs respondents were Deaf persons or organisations or international sign language users. Mr Bloxs emphasised  that the actual data that IDA received concerning the deaf community was limited.  Therefore, Mr Bloxs underlined the benefit that specifically reaching out to the  deaf community could have had in increasing participation.

The survey’s findings shed light on the barriers that OPDs face trying to increase participation such as: a lack of funding and collaboration from national governments. 42% of OPDs consider their experience of engagement with their government as ‘poor’, 44% have a ‘mixed experience’, and 13% of OPDs believe their collaboration with their national government to be ‘good’.  Mr Bloxs added that some deaf OPD respondents say that the authorities, whether national, regional or local, hardly consulted them on issues about deaf people which often leads to decisions being made without the contributions of the deaf community.

Ms Daniels concluded her presentation with a tour of the online current Global Survey, asking deaf organisations to fill out the survey, which has been completed with videos of the questions being interpreted in international sign language.

Greta Gamberini, a representative from the Global Disability Summit (GDS) Secretariat, was the final speaker at the event and presented the information concerning the upcoming GDS that will take place online on the 16th – 17th February 2022 in Norway. Ms Gamberini introduced the GDS, an event that was launched in 2017 to ensure the visibility of persons with disabilities and their perspectives. The objective of the GDS is to deliver new global and national level commitments on disability inclusion. Ms Gamberini stated that these commitments would create opportunities for more stakeholders to be engaged in more concrete steps to advance the agenda for persons with disabilities. Ms Gamberini presented the themes for the following year’s summit, which were:

In conclusion, this was an exceptionally informative event with many interesting speakers all of whom unanimously advocated that the perspectives of deaf organisations and deaf persons should be at the forefront of decision-making. It is important to note that all EU member states have ratified the UNCRPD, which includes Article 4.3 that explicitly states that governments are obligated, when making laws, policies, and programmes concerning persons with disabilities to ensure the views of the OPDs are considered and incorporated. In order to create and implement effective laws and policies there needs to be a body of data and evidence that can be drawn upon, therefore the participation of national associations of the deaf in these global surveys ensures that deaf perspectives are represented at the national and international level.

On the 20th of February of 2020, the Committee on Employment and Social Affairs of the

High-Level Political Forum side event: The power of partnerships in securing the rights of people with disability in the context of COVID-19

On the 8th July 2021, EUD attended a webinar organised by the Qatar Foundation for Social Work,

An update on two MEPs’ signing

Yesterday our European Parliament Election campaign set off to a good start. Within just one 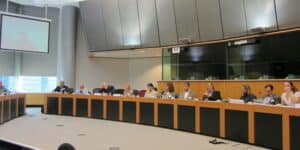 Here is the update of our 2014 European Parliament Election campaign. We have had the