On the 9th of November, the EUD attended the workshop on disabilities organised by the Policy Department for Citizens’ Rights and Constitutional Affairs at the European Parliament. The workshop aimed to focus on the EU’s implementation of the 2015 recommendations of the United Nations Convention of Rights of Persons with Disabilities (CPRD) Committee with regard to the new 2021 and 2030 Disability Strategy.

Commissioner Helena Dalli for Equality delivered the opening address, stating that persons with disabilities have a right to fully participate in all areas of life just like everyone else, and their inclusion in society is a key to achieving a union of equality. She argued that the new European Disability Strategy adopted in March would increase the EU’s efforts and actions relating to persons with disabilities.

Another speaker was Jose Smits, an expert from Inclusion Europe and the author of the study commissioned by the Policy Department entitled ‘The implementation of the 2015 Concluding Observations of the CRPD Committee by the EU’. He reported that the CRPD committee made specific recommendations to address several issues such as deinstitutionalisation and independent living. There was a recommendation to ratify the optional protocol that would adopt a horizontal equal treatment directive prohibiting discrimination on the grounds of disability and allow for a committee to be designated to deal with complaints against violations of the convention. Mr Smits stated that the EU had made progress in implementing the UNCRPD in relation to access, e.g. bringing into force the European Accessibility Act. Moreover, Mr Smits asserted that the Commission had effectively engaged with Member States on improving policies for employment, social protection, and vocation education for persons with disabilities.

Representing the perspective of persons with disabilities in the EU, Yannis Vardakastanis, President of the European Disability Forum (EDF), reminded those present that the CRPD Committee would start its second review of the EU in 2022. He stated that significant challenges and opportunities had marked the past six years, and that the COVID-19 pandemic has created a push back against the rights of persons with disabilities and their families, exacerbating discrimination, human rights violations, and accessibility barriers. Mr Vardakastanis called for greater legal harmonisation with the UNCPRD to ensure more robust legal protections for people with disabilities.

Jonas Ruškus, the Vice-Chair of the United Nations Committee on the Rights of Persons with Disabilities, condemned the institutionalisation of these people, especially children with disabilities, individuals with intellectual or psychosocial disabilities, and those on the autistic spectrum. Shockingly, he said, such institutionalisation persists across Member States of the EU. Mr Ruškus reminded the participants that the provisions of Article 19 on living independently and being included in the community are not being implemented, as observed by the CRPD Committee in their work relating to the 2015 recommendations.

In 2022, the CRPD Committee’s review should also be seen as an opportunity to assess progress and set up priorities for persons with disabilities, especially for deaf persons in the EU. We need the political ambition from both the national and European levels to respond to the concluding observations and fully implement the CRPD to ensure equal access for people with disabilities. It is the role of disability organisations to push EU Member States to enforce the 2015 recommendations. 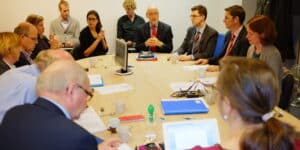 European Standard on Accessibility of the Built Environment

On 30th of September 2021, the EUD attended a ‘Roundtable Discussion on Equality Data’, hosted

European Day of Persons with Disabilities 2020