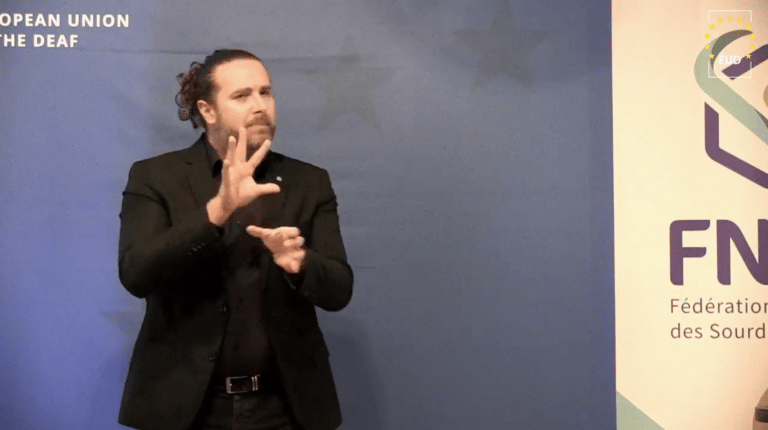 On Friday 27th May, at the EUD General Assembly in Marseille, France, EUD, in collaboration with the National Federation of France for the Deaf (FNSF), held a two-part seminar. The first half focused on ‘Political Participation’ and the second half discussed ‘Women in Politics’. During the first seminar, each panel member gave a short speech on the importance of deaf representation in politics, and political decision-making as well as the right to vote for deaf citizens which is addressed by Article 29 of the UNCRPD. Participation was explored from different angles, for instance in terms of a broader definition of political participation, away from the narrow understanding of voting rights, allowing for full political participation.

Dr Markku Jokinen, former EUD President​, discussed political rights including the right to vote for deaf, and disabled persons. Martine Vassal, President of the Departmental Council of Bouches-du-Rhône, underlined that accessibility is important via interpreters even with small budgets, as the voices of the deaf community must be heard. Marion Bareille, Mayor of Marseille District 13th and 14th, mentioned that the ​integration of the deaf is important, they must be in society rather than separated from it.

Vincent Cottineau, FNSF Président, made several key points. Mr Cottineau mentioned that the inclusion of deaf people in different councils is key. He also underlined the need for an accessibility budget in order to facilitate the inclusion of persons with disabilities to be elected. However, as it stands, there is only a very small budget for accessibility. He has engaged in meetings with ministers to outline the issue about the lack of interpreters for deaf persons to access their political rights. In fact, he continued, it would be good to have separate budget for interpreters, as well as a general budget for persons with disabilities. Mr Cottineau explained the objective for NADs on this issue – to lobby national governments.

On the 22nd June 2021, the UN specialised agency for ICTs, the International Telecommunications Union (ITU), hosted a webinar 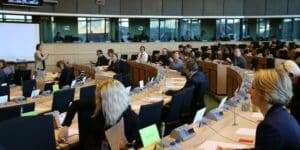 EMPL: Implementation of the CRPD

On 17 February, the Committee for Employment and Social Affairs in the European Parliament organised